On Friday, 11th of February there was 14th anniversary since Sri Sri Gaura-Nitai appeared in our home. There was not such a big festival as during the inauguration ceremony when there was more then 60 devotees attending.

Moreover, this year my mother decided to invite some of our most close neighbours1), serve them prasadam and show video filmed during the installation ceremony in 1997.

So, when our guests arrived at 5pm, we gave them something to eat…

Unfortunately, I did not make photo of all preparations which were served to our dear guests, but here you can see what was offered to our Deities for the lunch. 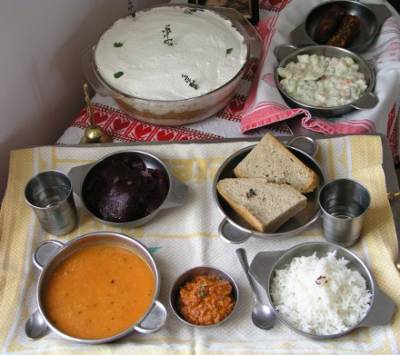 After having nice meal, our neighbours were enjoying video which showed all the steps performed during the installation ceremony starting from the decorating the altar with all kinds of flowers and fruits, bathing ceremony (called abhiseka) etc.

As it is recommended to perform sankirtana yajna in this age of kali-yuga, there was lot of singing during the ceremony and our neighbours stayed till the end of the video which was spiced with my mother’s enthusiastic preaching.2)

What will be the purifying effect on our guests—only time will tell us.

For now, let’s be satisfied seen the beautiful form of our Sri Sri Gaura-Nitai…3) 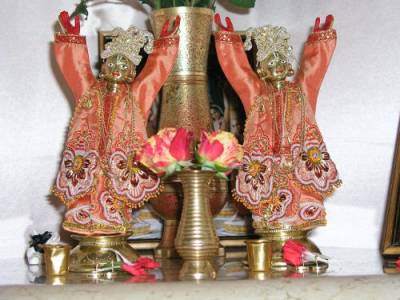 gaura-nitai, prasadam
1)
They are not devotees in the sense that they are not practising spiritual life in a way which we do.
2)
I was not being able to stay during the whole video since I had to drive my wife to the working place.
3)
The picture was taken on the 14th Anniversary day.

Except where otherwise noted, content on this wiki is licensed under the following license: CC Attribution-Share Alike 4.0 International